“Build on a Strong Foundation”

The painting titled “Cyclone Pam II: 13th of March, 2015” shows a mother bending and praying over her child. The waves crash over her but a palm tree bends protectively over them. The palm tree is Juliette’s favorite tree with strong roots able to withstand strong winds. The woman’s skirt is modeled after the traditional clothing on Erromango. On the horizon you can see small crosses representing the lives taken by cyclone Pam in 2015.

During the cyclone, Juliette and neighbors took refuge in a container. Pam had moved to Vanuatu overnight and people could not see anything – they could only pray. In the morning they climbed out of the container to see that almost everything was destroyed. There was a hut behind Juliette’s studio, built traditionally using palm trees, and it withstood the cyclone with big trees above it deflecting the wind. Juliette believes God heard their prayers and that nature protected them that night. 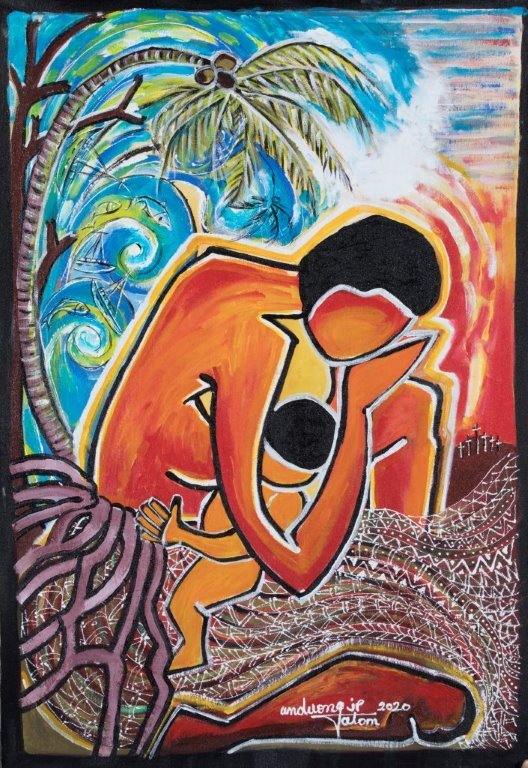 Juliette Pita is currently the most well-known artist in Vanuatu. She was born in 1964 on Erromango Island and is the third of eight children. She is a widow with three children and her adopted niece.

Her talent was discovered early on. At school she was always the best in art classes. As a child she went to boarding school in Tanna because there was no school on Erromango. Later on, she moved to Efaté to attend Lycee. Her parents could not afford to pay tuition so a family friend offered to pay her fees and take her in. She was the first woman to graduate from the Institut National de Technologie du Vanuatu (INTV). Juliette never imagined making money from her art but she believed God had plans for her. She gives all the money she earns to anyone who needs help.

With the independence of Vanuatu in 1980, she felt that she had to show with her work that she and the people of Vanuatu were mature enough to be independent. In 1994, she had her first exhibition in Paris, and then later she had exhibitions in Sydney, New Caledonia, and across Europe.

Her motifs are taken from the traditional culture of Vanuatu, but also from her current life. She works part-time as a fabric painter for sarongs that tourists can buy in the city center. She also sells her paintings to tourists in Port Vila who come on cruise ships. Her children and nieces and nephews are also artists and sell paintings to pay their school fees.

The World Day of Prayer is a global ecumenical movement led by Christian women who welcome you to join in prayer and action for peace and justice. It is run under the motto “Informed Prayer and Prayerful Action,” and is celebrated annually in over 170 countries on the first Friday in March. The movement aims to bring together people of various races, cultures and traditions in a yearly common Day of Prayer, as well as in closer fellowship, understanding and action throughout the year.

Verse of the Day

For our struggle is not against flesh and blood, but against the rulers, against the authorities, against the powers of this dark world and against the spiritual forces of evil in the heavenly realms. Therefore put on the full armor of God, so that when the day of evil comes, you may be able to stand your ground, and after you have done everything, to stand. — Ephesians 6:12-13 (NIV)